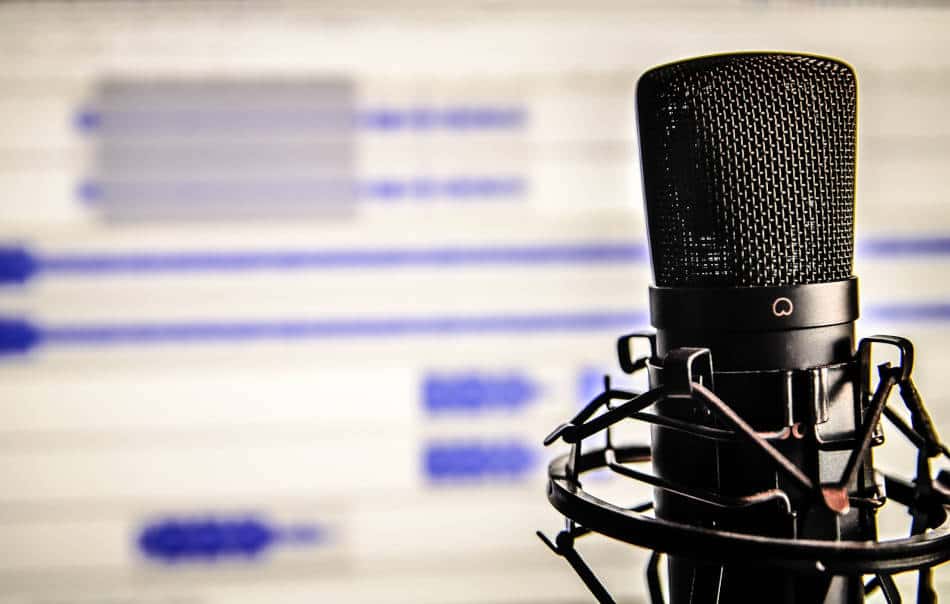 When you think about all the things you will need to be able to do in your home studio, recording sounds of various kinds is probably going to be one of them.

You might be recording people talking or singing, acoustic instruments, electronic instruments, sound effects, or making sampled sounds to include in your productions.

For all of these recording activities you are going to need a microphone of some kind. Microphones do a pretty simple job – they convert sound waves into an electrical signal. But what microphone should you get?

But, the answer clearly depends on what it is you want to record, and where you want to do the recording. We have picked up some ideas about this over time and we’d like to share them here.

Try the Microphone That Came with Your Phone

If you are experimenting with your audio recording software, then your home recording studio might just be your laptop computer on your lap while you are sitting on the sofa.

In this type of situation you will probably just want to get some audio into your computer so that you can practice things like doing multiple takes of the recording, punching in and out of a recording, or applying various effects to the audio tracks to see how they work.

You probably won’t want to have audio interfaces plugged into your computer or be holding instruments or microphones, so how about just using the microphone that’s included with the headphones you got with your cell phone.

When I suggest this to people they often laugh and tell me that the quality of the recordings will be no good. But sometimes this doesn’t matter.

You don’t need pin-sharp recordings if you are just trying things out. Also, if you are going to add effects to the sound or manipulate it in other ways the quality of the recording won’t matter too much either.

I’m frequently amazed at how good recordings of my voice sound when I have spoken, whistled, hummed or sang into the microphone in my phone headphones (like most people, I hate the sound of my voice on recordings but I’m just talking about sound quality here).

You can alter the input volume using the volume control on the headphones, so you have a little more control over recordings than you might expect.

One unexpected advantage of using the phone headphones microphone is that you don’t get the big “pops” on “P” and other “plosive” sounds. This is probably because the microphone is down under you chin, which protects it from these bursts of breath as you speak or sing.

I have used the headphones that came with my phone a few times when making voiceover tracks for e-learning materials and the results have been pretty good.

There are various options when it comes to microphones. This includes the one that came with your phone. We’re going to concentrate on what might be described as “traditional” microphones.

There are three basic types of microphone that are commonly used in recording, and you will need one or more of these for your home studio.

All of these microphones contain something, a diaphragm or metal strip, that is made to vibrate by the incoming sound waves. The different types of microphone convert this vibration into an electrical current in different ways.

The electrical current is the audio signal, which can then be amplified and recorded into an audio track in your DAW software, or onto tape if you going old-school.

The main microphone types are as follows:

Dynamic microphones are the ones you will have seen people singing into in live concerts and on TV. One of the advantages of dynamic microphones is that they are pretty robust and can stand up to the rigors of live performance.

That some singers swing these microphones around by the wire lets you see how well they stand up to punishment. They can also handle high levels of sound input without the output becoming distorted. This is helpful for live performance when singers may sing more loudly because they are able to hear themselves.

A Coil Attached to a Vibrating Membrane

Dynamic microphones contain a thin plastic membrane (the diaphragm) with a coil of wire attached to it. As the sound waves make the diaphragm vibrate, the wire moves with it.

The coil surrounds a magnet. As the coil moves in the magnetic field an electrical current is generated in the coil that represents the sound waves that made it move.

The coil that is attached to the membrane acts adds a little bit of weight, which makes the membrane less sensitive to the sound waves hitting it. As a result dynamic microphones aren’t very sensitive to higher frequency sounds, so the lower frequencies tend to be emphasized in the audio signal that is produced.

It’s mainly for this that reason dynamic microphones aren’t used very much for studio recording where, ideally, you would be trying to capture every aspect of the sound. However, as I mentioned above, they are great for live performance.

A ribbon microphone has a thin strip of metal foil (the ribbon) suspended between the poles of a magnet. Sound waves make the ribbon vibrate and the movement of the ribbon within the magnetic field generates an electrical current in the ribbon representing the sound waves that caused the vibration.

Because the thin metal foil ribbon is so light it is sensitive to all sound frequencies. This includes the high frequency vibrations that dynamic microphones have trouble picking up.

However, ribbon microphones still tend to produce a sound that some people think is a little flat. This seems to be because the vibrating ribbon doesn’t produce much resonance when compared to the the diaphragm used in the other types of microphone.

Another issue with ribbon microphones is that the level of the audio signal produced can be quite low, so it needs quite a lot of amplification (by a pre-amp) before being recorded.

Because the foil ribbon is suspended between the magnetic poles in the middle of the microphone it can pick up sound from two opposite directions at the same time. A microphone that can do this is called “bidirectional”.

Ribbon microphones can be quite expensive and very delicate, so they have to be handled with care. This is probably why condenser microphones are more commonly used for studio recording.

Condenser microphones contain a diaphragm which is made to vibrate by the sound waves coming into contact with it.

The diaphragm is suspended in front of a metal backplate, with only a tiny gap separating them. An electrical charge is applied to the backplate.

Vibrations Cause Variations in Capacitance

As the diaphragm vibrates back and forth the distance between it and the backplate gets bigger and smaller, which causes changes in the level of capacitance.

The capacitance goes up as they they move closer and goes down as they move further apart. This results in voltage changes and an electrical current that represents the audio signal generated.

Since an electrical charge needs to be applied to the backplate, condenser microphones need a power supply to make them work.

This is sometimes referred to as “phantom power” and this would need to be provided by the audio interface the condenser microphone is plugged into. If you have an audio interface connected to your computer you may see a button labeled “+48V”, which is how you turn on this phantom power supply.

Condenser microphones normally have to be connected to the audio interface by a 3-pin XLR cable, which enables the phantom power to be delivered to the microphone in addition to sending the microphone signal to be amplified and recorded.

Since the diaphragm in a condenser microphone is very light it can be made to vibrate easily by sounds of all frequencies. This makes them much more sensitive that dynamic microphones and the audio signal produced includes all frequencies fairly evenly.

The lightness of the diaphragm also enables it to start moving very quickly, so it can catch the attack of a drum or any other sounds with a similar fast attack.

Condenser microphones have to be handled carefully as they can be damaged fairly easily. Also, due to their sensitivity the signal can easily become overloaded. This is why you seldom see condenser microphones being used for live performance, and they are usually restricted to recording studios.

The microphones we have been looking at up until now will be connected to your recording software via some kind of audio interface.

I thought it was worth having a look at microphones that can convert the audio signal to a digital signal internally ready to be sent to the computer. This means you don’t need a separate audio interface.

These microphones are usually called USB microphones. The actual microphone will be of the dynamic or condenser type and will work in the way described above. It’s the way it connects to your computer for recording that is different.

If you are getting the equipment together to set up your home studio, and you are only buying one microphone, I wouldn’t recommend buying a USB microphone.

Having said that, USB microphones are great for a number of purposes.

A USB microphone is useful if you want to record audio without having to connect everything using an audio interface. You just plug your microphone into the USB port and away you go.

However, you will need an audio interface for recording instruments like electric guitars and keyboards. It will really help to have everything connected to your computer, including microphones, using the same audio interface.

So, What Microphone Should I Get for Home Studio Recording?

From the information above it seems that the best choice of microphone for home studio recording is a condenser microphone, which will be connected to your audio interface using an XLR cable.

You can see a range of the condenser microphones available on Amazon. Even if you don’t end up buying from there, you can get a good idea of the features and range of prices that you will need to think about.

At the other end of the scale they have condenser microphones from Neumann that cost nearly $4,000 and one from Sony that is nearly $10,000.

Obviously you aren’t going to go there just yet, but do you think the difference in sound quality would justify the price? Some people obviously think so.