When choosing a MIDI keyboard, one of the big questions to ask is about how many keys you need. If you are thinking about a MIDI keyboard with full-sized keys, the options are usually 25 keys, 49 keys, 61 keys, or 88 keys.

A keyboard with 88 keys gives you direct access to the full range of notes available on a traditional piano keyboard, but you may not have room for that in your studio. You may not have space for a 61 or 49-key keyboard either, so a 25-key keyboard might be the most practical option.

Also, the cost normally goes up as the number of keys increases. This means that size might not be the only constraint, you might be limited by your budget too. The smaller 25-key keyboards tend to be the most affordable.

So, the question we’re asking here is about whether 25 keys on a MIDI keyboard will be enough.

25 keys is enough for a MIDI keyboard if you don’t need to play with both hands at once. You have the option to adjust the octave played across the full range of pitches on a software instrument. 25-key controllers provide a wide range of knobs, pads, buttons and wheels, enabling you to interact with your DAW software.

We’re talking here about keyboards with full sized keys. You can also get smaller keyboards with mini-keys, usually 25 or 37 keys. The reason I’m writing this is because I’m currently looking to upgrade from a MIDI keyboard with mini keys to one with full-sized keys.

I have been using an AKAI LPK25 for a number of years, but the USB connection has stopped working so I need a new one. This mini keyboard has been great and it’s really convenient to use. The keys are velocity sensitive and you can play a melody or chords very easily.

However, I’ve been trying to play and record left-hand parts, like you would on a piano, and this doesn’t really work with the mini keys. This is why I’m looking to replace it with a keyboard that has full-sized keys. I also don’t have much space in my little studio, so I’m looking at how small a keyboard I can get. Will 25 keys be enough?

How Big Are the Various Keyboards?

Full-sized keys (the white keys) are about 6 inches long and just under an inch wide. Sweetwater have provided a really useful visual guide to keyboard size. They compare keyboard sizes from grand piano, various synthesizers, all the way down to the Casio VL-1 (which I still have somewhere) and even a computer keyboard.

Two very popular providers of MIDI keyboards are Native Instruments (NI) and M-Audio, who make the Oxygen range of keyboards. I’ve been looking at the keyboards they each offer, so I have used them to gauge typical keyboard length.

Both companies make MIDI keyboards with different numbers of full-sized keys: 25, 49, 61 and 88 keys respectively. In terms of depth (that’s from the back of the keyboard unit to the front) the keyboard units range from around 10 inches to 12 inches.

As for height, the keyboard units range from around 3 inches to 5 inches, the taller units being the ones with piano-style hammer action, which are usually the full-length 88 key keyboards.

Since it is keyboard length that’s likely to be one of the deciding factors when buying a MIDI keyboard, I have included a comparison of keyboard lengths below.

As you can see from the table above, a MIDI keyboard with 88 keys is nearly 5 feet long. You would need to think about the amount of space you have available, and whether you could fit this in. If you play a lot of keyboard-based music, or you need to be able to play with both hands at once, you might need to make space for the extra keys.

Something that struck me about the table above is that there doesn’t seem to be a huge difference between the length of keyboards with 49 and 61 keys. The extra 12 keys you get with with the 61 key model only adds about 6 inches to the overall length.

The 61-key version of whatever type of MIDI keyboard you are considering is bound to be a bit more expensive than the one with 49 keys. However, the cost might not be that much more, so it’s probably worth looking into.

Finally, MIDI keyboards with 25 keys are around 19 inches long. This is probably small enough to fit on a desktop without taking up too much space. You can push it away to one side when you aren’t using it, and pull it in front of you quickly whenever it’s needed.

It’s also small enough that you can disconnect it from your computer and easily store it until you need it again. You could also do this with the larger versions, but finding somewhere to put it could be a problem.

This size of keyboard has 15 white keys (and 10 black ones), which are each just under an inch wide. The extra space is taken up by the pitch-bend and modulation wheels, usually placed to the left of the keys.

25-key MIDI controllers that provide these features include the M-Audio Oxygen Pro 25, Native Instruments Komplete Kontrol A25, and the Nektar Impact LX25+. You can learn more about these keyboards at the bottom of the page.

These control wheels are really important for the overall experience of playing the keyboard. MIDI keyboards with mini-keys (mentioned earlier) usually have some kind of knob or touch strip for controlling pitch and modulation, and I have always found this to be one of the limitations of this size of keyboard.

However, the new M-Audio Oxygen Pro Mini has 32 mini keys, but it also has pitch bend and modulation wheels in addition to a great range of other controls. I’m looking forward to trying it out.

As we’ve seen, for practical reasons relating to size, a 25-key MIDI controller is a good choice. But what about actually playing it?

They are usually triggering a sound produced by a software instrument on computers they are connected to.

There will be a selector button (or buttons) that let you move the range of pitches that the keyboard triggers up and down, usually an octave at a time. This means you can play the lowest and highest notes available on an 88-key keyboard, but just not all at the same time.

If you need to play keyboard with both hands at the same time this is likely to be a limitation. Many keyboard pieces have an octave or more between the notes played by the left and right hands.

You would probably need to play and record the notes played by one hand, then move the octave up or down to play the notes with the other hand. Depending on the type of music you make, this might be more or less of a problem.

Many of us will be buying a MIDI keyboard controller to do more than just play notes. As outlined above, the keys are just triggering notes in a software instrument, and we need to be able to control other aspects of those instruments.

When buying a MIDI keyboard we need to do more than think about how many notes we need. We need to look at the other controls provided.

MIDI controllers keyboards usually come with a range of knobs, buttons, pads and wheels that enable us to control our software instruments and other aspects of our DAW software. There are usually fewer controls available on a 25-key controller due to there being less space to place them, but there will still be plenty to work with.

It sometimes appears that all the control and functionality you might need for interacting with your music software is provided with the 25-key versions, and the companies have to think of some additional things they can include to fill up the extra space available above the keys.

Some MIDI keyboards, like the Native Instruments A-Series seem to provide exactly the same controls, whether you choose 25, 49 or 61 keys, and the only difference seems to be the number of keys.

You can assign (or connect) these controls virtual controls in your DAW software. For example, this means you can use pads to play drums, knobs to open and close the filters on your synths, buttons to start and stop playback, and wheels to modulate various aspects of the sound as you play.

When I started thinking about upgrading my MIDI keyboard I was really thinking about going for one with 49 keys, or even 61 keys. I liked the idea of sitting down and playing the keyboard with both hands.

However, I use all sorts of instruments: hardware synths, guitars and harmonica, not just the keyboard. Space is a big issue and I’m not able to dedicate the space needed for a bigger keyboard.

So, for practical reasons a 25-key MIDI controller is the best option. It’s small enough that I can move it out of the way when I’m not using it. The full-sized keys will enable me to play passages easily, without getting my fingers tangled up (like with mini-keys).

The octave can be adjusted to play any notes needed. There is a big enough range of MIDI-controls to be able to interact with the DAW software. So 25 keys will be enough.

Products mentioned in this article 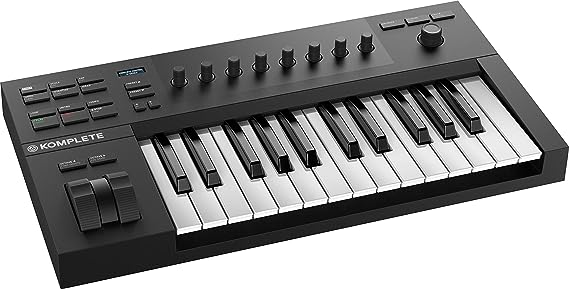 Native Instruments Komplete Kontrol A25 Controller Keyboard
$169.00
Learn More
We earn a commission if you make a purchase, at no additional cost to you. 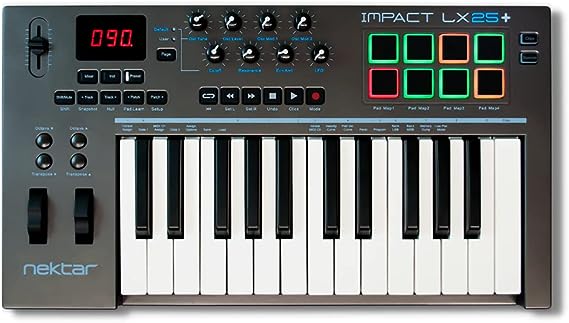 Nektar, 25-Key Midi Controller (IMPACT LX25+)
$119.99
Learn More
We earn a commission if you make a purchase, at no additional cost to you. 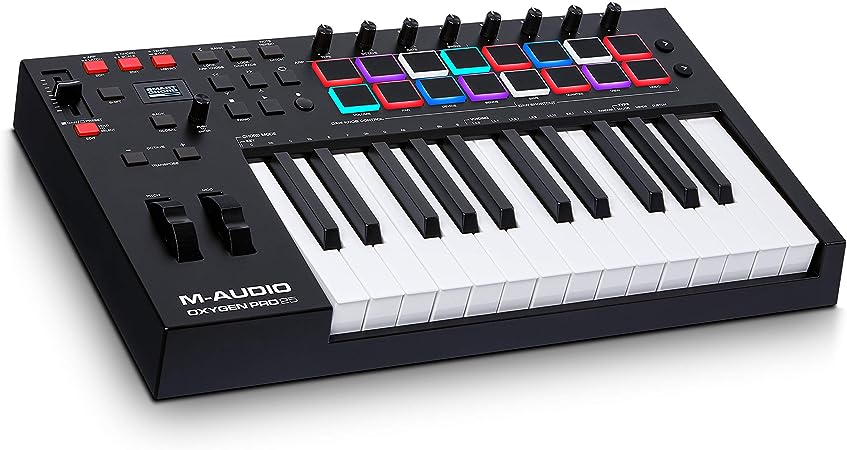 M-Audio Oxygen Pro 25 – 25 Key USB MIDI Keyboard Controller With Beat Pads, MIDI assignable Knobs & Buttons and Software Suite Included
$149.00
Learn More
We earn a commission if you make a purchase, at no additional cost to you.

AKAI Professional LPK25 - USB MIDI Keyboard controller with 25 Velocity-Sensitive Synth Action Keys for Laptops (Mac & PC), Editing Software included
$59.00
Learn More
We earn a commission if you make a purchase, at no additional cost to you.

When you think about all the things you will need to be able to do in your home studio, recording sounds of various kinds is…

If you use Ableton Live you may have been confused by the appearance of some files ending with .asd in your computer folders. These Ableton…

When you are looking to buy your first audio interface, or upgrade the interface you already have, you might be wondering how much money to…

You have probably heard people talking about “EQ” in relation to music production. They talk about “rolling off” low frequencies, and making the individual parts…

Due to a lack of vertical space I want to place my studio monitors horizontally. So I need to know if the tweeters should be…

Home Studio Magic is a participant in the Amazon Services LLC Associates Program, an affiliate advertising program designed to provide a means for sites to earn advertising fees by advertising and linking to Amazon.com. We also participate in affiliate programs with Loopmasters, TrainYourEars and other sites, and we are compensated for referring traffic and business to these companies.